PHILADELPHIA — This year, Margaret Shepherd is knocking on the front door of nearly every house in West Oak Lane. Her daily rounds are part of a large-scale effort to stem foreclosures in this blue-collar, largely African-American neighborhood. 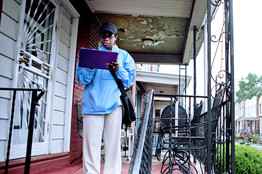 “I’m getting so much exercise, it’s ridiculous,” Ms. Shepherd said on a recent afternoon.

West Oak Lane has the kind of yo-yo economic history that marks many urban areas. The 80-year-old neighborhood had been on an upswing thanks to the efforts of local community groups, rising real-estate prices and years of easy credit that poured money into local businesses.

But unemployment and foreclosures risk wiping out two decades of progress. Now the Ogontz Avenue Revitalization Corp., funded through a combination of real-estate revenue and grants, is looking to buy foreclosed homes to keep them occupied and values stable. Instead of waiting for owners to come to them, the group brought Ms. Shepherd in to go block by block in search of stressed homeowners.

Foreclosures and unemployment are wreaking havoc in communities rich and poor. But these problems can have more severe effects in transitional urban areas just starting to come back, spurring efforts to prevent a new slide.

Boston Community Capital, a nonprofit that finances real estate in lower-income communities across Massachusetts, is buying foreclosed homes from banks and selling them back to homeowners at lower prices and under new mortgage terms. “The goal here is trying to stabilize neighborhoods by trying to keep homes occupied and productive,” says Elyse Cherry, chief executive of Boston Community Capital.

There are an estimated 1,500 homes in some version of foreclosure in the West Oak Lane area, which has about 20,000 homes, according to the Reinvestment Fund, a nonprofit that invests in Philadelphia. The metro area’s unemployment rate jumped to 8.2% in May from 4.9% a year ago, a rise that has fallen harder on areas like West Oak Lane, where residents tend to be less educated and many workers depend on hourly and overtime wages to make ends meet. According to data compiled by PolicymMap, 60% of West Oak Lane households earn less than $60,000 a year.

West Oak Lane sits near poverty-stricken North Philadelphia but also is close to wealthier neighborhoods like Chestnut Hill. Jeremy Nowak, president of the Reinvestment Fund, calls it a “barometer neighborhood,” because of its sensitivity to economic swings.

The neighborhood was established in the 1920s and was at first a middle-class, predominantly white area. Following World War II, it became more racially mixed and then predominantly African-American. It went into decline in the 1970s, and by the early 1980s West Oak Lane had hundreds of abandoned homes and a near-empty strip mall covered in graffiti.

The neighborhood’s most recent upswing started about two decades ago. The Ogontz Avenue Revitalization Corp., which was founded in 1983 and was the brainchild of state Rep. Dwight Evans, started off by renovating the Ogontz Plaza shopping center, bringing in tenants including Rite-Aid and a video store.

About a decade ago, the group started buying and renovating abandoned homes, reducing the number of vacants from 350 in 1999 to less than 70 currently, which helped raise the values of surrounding homes. The six-year-old West Oak Lane Jazz & Arts Festival drew 3,000 in its first year in 2004; this year, the three-day festival drew more than 500,000.

Eight years ago, the boards came off Tulepehocken Street house. Local kids stopped hanging out on the stoop. Munirah Abdul-Karim moved in and outfitted the living room with a leather couch that sits under a framed quilt with gold Arabic script, a nod to her Muslim faith. “I paid $78,120 and zero cents — it’s my life,” says Ms. Abdul-Karim, whose given name is Myra Forrest.

But now, she is struggling to stay in her home. Early this year, Ms. Abdul-Karim lost her job in customer service at an insurer, which paid as much as $2,800 a month with overtime. She fell behind on her $639 mortgage payment and had almost lost her home by the time a friend referred her to Sharonda Sanders, a credit counselor at another nonprofit who works in an OARC office in West Oak Lane. Ms. Abdul-Karim has worked out a payment plan that allows her to stay in her house, but remains unemployed.

One problem facing organizations like OARC is that many homeowners don’t ask for help until they are deep into the foreclosure process. That is why OARC brought on Ms. Shepherd, who is on loan from the Greater Philadelphia Urban Affairs Coalition, to find people in distress earlier.

On a recent afternoon, Ms. Shepherd walked up and down one West Oak Lane block, placing fliers in mailboxes or under doors. She went through foreclosure herself a few years ago, and says the experience gives her a sense of purpose for the job.

It isn’t always pleasant. The people who answer their door often give blank stares before turning away. Many of those who need help call back later, away from neighbors. Recently, a woman stood on her doorstep and screamed at Ms. Shepherd for exposing her problems to the neighbors. Ms. Shepherd calmed her down by telling her she had been through foreclosure herself.

Click here to read this article by Conor Dougherty (conor.dougherty@wsj.com) in The Wall Street Journal which appeared on July 14, 2009.